Clothing swaps have to be the eco-goddess' gift to recovering shopaholics - new clothes at no cost and no carbon footprint.

I've participated in a few swaps at work and among other things I've scored a now-favourite sundress and comfy harem pants perfect for my writing days.  So when I spotted an ad for the next swap hosted by The Clothing Exchange (as part of the NSW State Library's On Sale! exhibition) I quickly jumped at the chance to attend a swap hosted by these pioneers of the swap trade.

The last swap at work was only a couple months ago, and since I've generally cut down on my shopping over the past few years I really had to dig around for quality pieces that I no longer wear.  I managed to find a pair of Michael Kors metallic strappy sandals and a Saba dress, both in good condition and both in need of a new owner - they're so beautiful I've just grown tired of them, and they deserve better than being hidden in a dark closet. 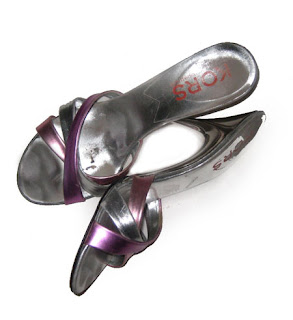 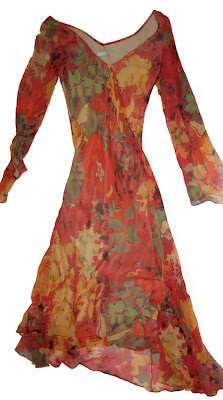 When I checked in at the swap (check-in lasts about 45 minutes while the volunteers examine everyone's goods and then hang up the accepted pieces on Green Hangers) the volunteer looked baffled when she confirmed "only two?" and then handed me two buttons, my currency for the evening.  Swappers are allowed to trade up to six items and plenty of them come armed with more than six in case some of the pieces don't make the cut; my two items were a pathetic attempt compared to the seasoned swappers in the room. The exchange rate for items is exactly one for one - one button equals one item - and no value is placed on designers or style because, as they put it, beauty is in the eye of the beholder.

As I waited for the swap to start I could feel the excitement building as swappers plotted their attack on the racks.  This was a reasonably small swap, I'd guess about 100-150 people, and I can't imagine what the atmosphere must be like at some of the larger swaps (Clothing Exchange has hosted a swap of 1700 people!).  The room continued to fill, as did the racks of clothes, and there were swappers of all ages, sizes and even genders (though 99% of us were women).  As the rules of the swap were announced - including a coin toss decision if two swappers grabbed an item simultaneously - everyone pushed to the front to enter the 'store' that had been set up on tables and wooden racks where items were separated by category.

The swap started and it was mayhem!  Swappers crammed in between racks, rushing around with their arms full of clothes, frantically deciding between this maxi sundress or that velvet blazer.  I had played it all wrong - I'd been so busy chatting and observing the scene that my friend and I found ourselves at the back of the pack entering the swap, and most of the racks were quite bare by the time I got to them. For awhile I even took post outside the fitting room hoping some good rejects would be tossed back onto the racks.


I had fallen in love with a skirt during check-int - red cotton with tape-measure ribbons in green, yellow and blue running around the bottom hem - but it was gone by the time I got to the skirt rack.  Later I saw the skirt in another swapper's arms and my shopping-jealousy kicked in - I needed that skirt! In my friendliest voice I asked her to let me know if she decided she didn't want the skirt because I loved it so much. She was lovely, but I was rejected; she had won it in a coin toss and I was the third person to ask her for it.  Beauty may be in the eye of the beholder, but that skirt was desirable to many of us.

I ended up with two new additions to my wardrobe at the end of the swap (which only lasted about 25 minutes, impressive effort swappers!) - one vibrant peacock top and a cute cotton skirt - definitely no brand names but I really didn't mind. 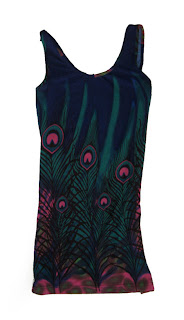 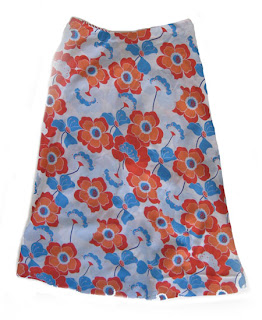 Truthfully, I grabbed the skirt just because I had a button to spare. It's too big for me so will require tailoring; if I don't get around to it I'll just bring it back to the next swap. My friend ended up with five new pieces - including a fabulous black and white sundress and a great floral number that will look amazing with black tights and should easily work in the office or out and about.  We were among the last to leave, and I was impressed with how few items remained on the racks (the remaining pieces will be donated to Red Cross and Fitted for Work).


Thanks Clothing Exchange for a great night!  I'll be back at your next swap, and you can bet I'll be waiting at the front when the swap opens with my plan mapped out.  Who knows, maybe that red skirt will even end up back on the rack?
Posted by Lisa Heinze at 12:40