Check out the latest additions to my dining room! 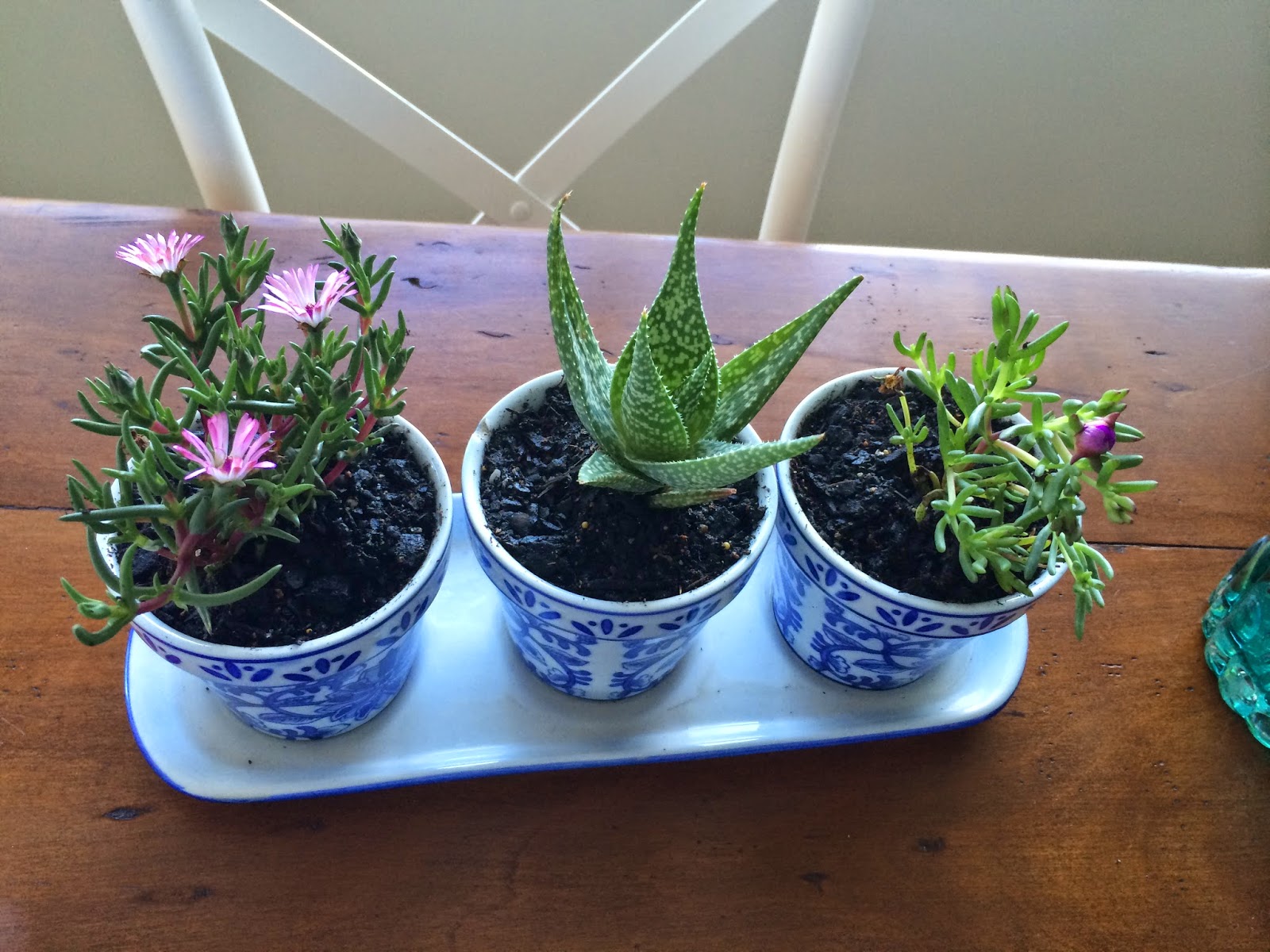 I've wanted plants for ages. I'm almost embarrassed to admit that I've lived with these gorgeous little pots I picked up in the Garage Sale Trail since the day I moved into my apartment - over 6 months ago. Eek! I paid $2 for all of them, and they've just been sitting pretty this whole time, waiting for me to get my act together.

Finally last weekend, when the cold finally worked its way into my apartment enough to warrant the purchase of a heater, I took a slight detour while at Bunnings and picked up some delightful little succulents as well. 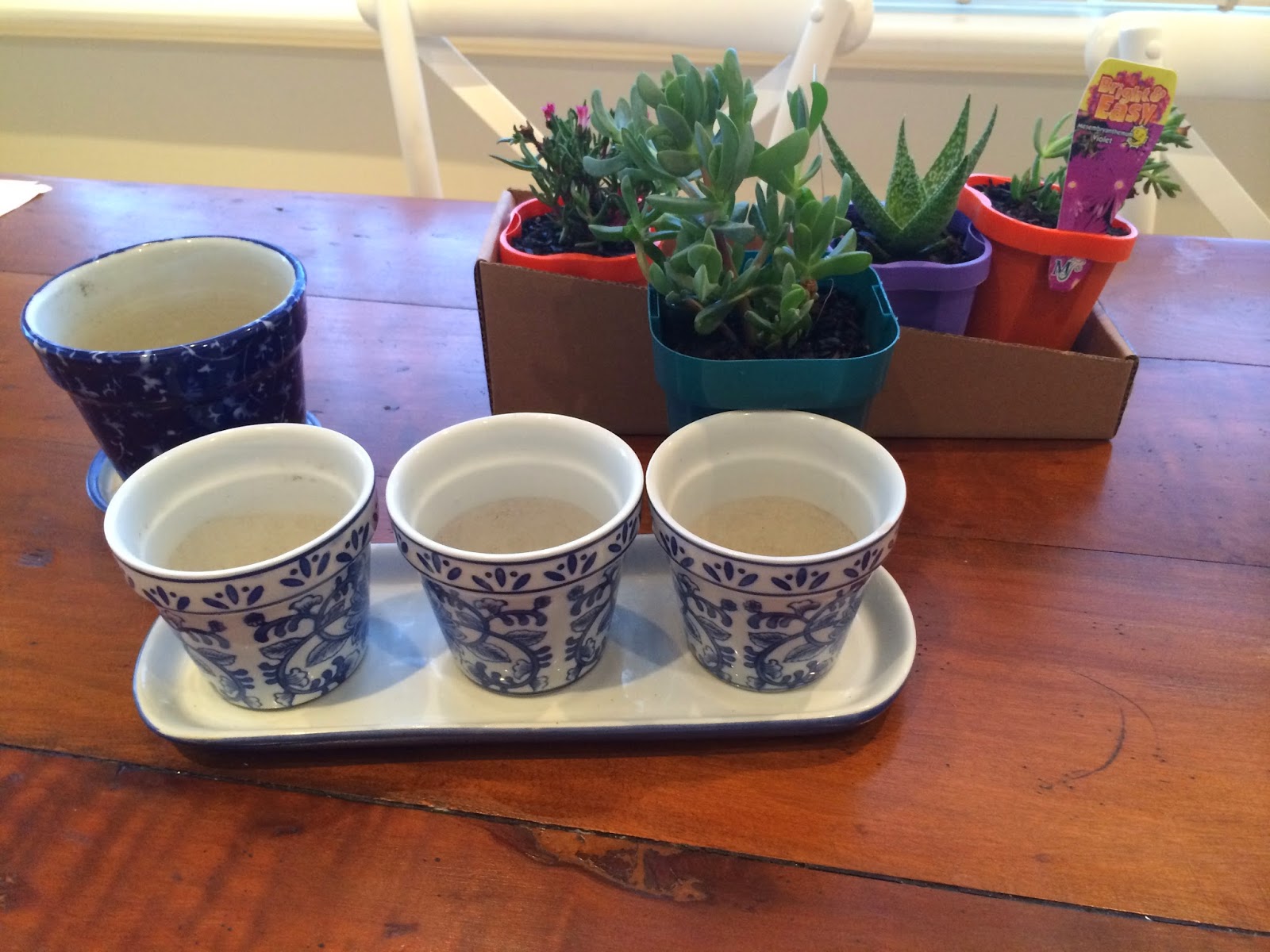 Once I got them home the planting process took well under 15 minutes. 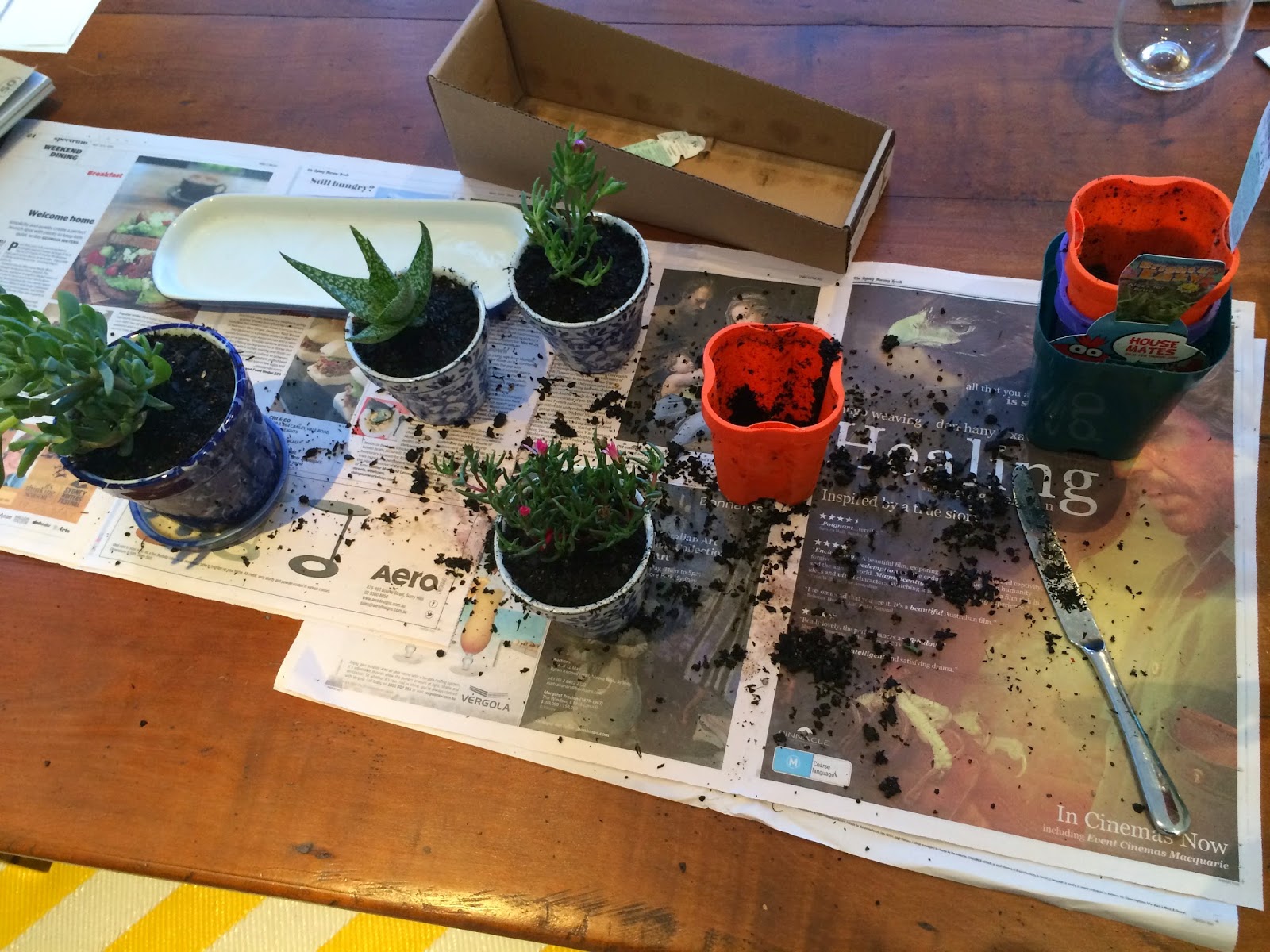 I absolutely love the colour they bring to my dining table and appreciate the healthy air they provide me (did you know that just a few plants can reduce indoor air pollution, improve creativity and productivity, and reduce stress?). How did I possibly lived without them for this long! 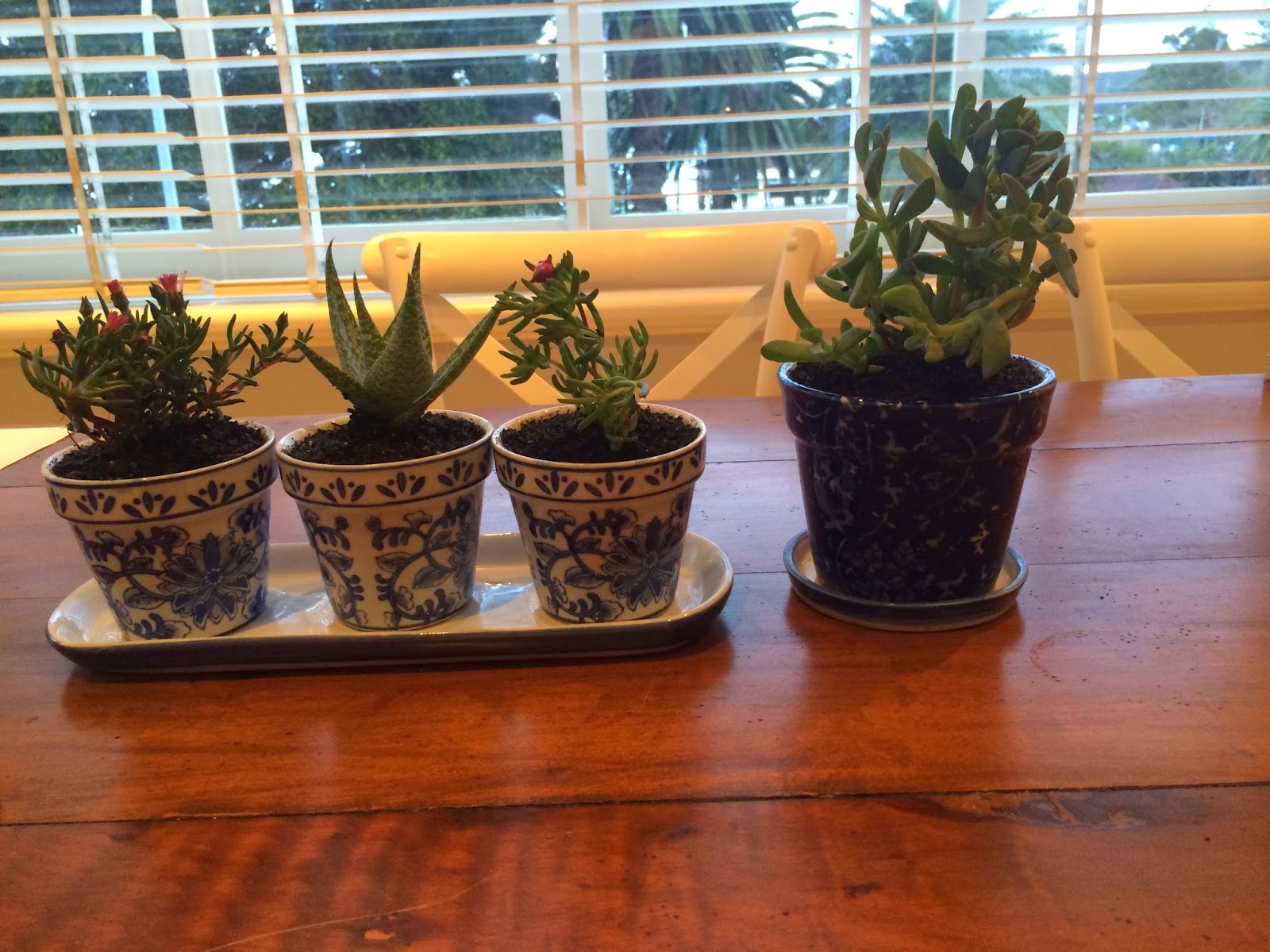 If you have any tips on great indoor plants I'd love to hear them, I'm in the market for a couple of small trees to add a little bit more green to my home.

Oh, and for those who are wondering, I am not an oil pulling convert yet (I am managing to do it about 50% of the time) but I haven't given up. I even got my gorgeous hubby to give it a try, and in his words, "It wasn't as bad as I thought it would be." Well said my Darling.
Posted by Lisa Heinze at 18:06 0 comments

Email ThisBlogThis!Share to TwitterShare to FacebookShare to Pinterest
Labels: home

I hope you've all had a great weekend - an extra long one for my fellow Australians!

I want to share a news story I participated in for EcoSydney Magazine, an independent online magazine featuring the latest environmental news from around Sydney.

The call for fast fashion to slow down - by Jordan Wellard


I just love that there's an online magazine dedicate to sustainable Sydney - I look forward to reading your latest news.

Hmmm, with a title like that, does this mean I’m committing to more? Well, we’ll see in 20 minutes.

I don't know about you, but I’ve been reading all the hype about oil pulling for the past year or so. It's an ancient Ayurvedic remedy for oral health and detoxing, and involves slowly 'swishing' organic oil (sesame, coconut, or other high quality vegetable oil) around in your mouth first thing in the morning, before you've eaten or drunk anything. Proponents claim it pulls bacteria and fungus out of your mouth, teeth and gums, greatly improving oral and overall health. Various studies have shown improvements to gingivitis and reductions to bacteria growing in participants' mouths. Other claims are benefits to the lymphatic system and cellular restructuring, as well as a preventive measure for everything from migraines to insomnia to reducing the severity of a hangover.

Of course I forgot that not everyone reads natural-living blogs and articles when I asked my colleagues who had tried oil pulling and received a bunch blank stares, then incredulous looks as I explained what it was and how it worked.

So I volunteered to be the guinea pig and blog it so others could live vicariously through my oil pulling experiment – I mean, I was bound to try it eventually, why not start now?

I have a slight head cold right now, and I hope this doesn’t impact my experience. I'm mostly suffering a sore throat, and thankfully can still breathe through my nose - maybe it will lessen the severity of my cold if it really does what it claims?! I’ve also read it can cause a ‘detoxing’ effect the first few times you try it, as in getting a headache afterward, and I'm hoping this doesn't occur.

8.02am : scoop a teaspoon of organic coconut oil from the jar and put it in my mouth. It’s solid, and it feels like too much in my mouth, but only takes a few (gross!) seconds to melt. Find myself fighting the urge to swallow while it’s solid, but once it’s liquid it’s not so bad.

I’ve read that you can use any number of high quality vegetable oils (anything suitable for cooking), but coconut oil is the big trend these days – probably because it tastes delicious! Sesame oil is the other popular choice.

8.05am : amazed at how many ‘bubbles’ are in the liquid already. I’m assuming this is saliva that’s formed once the oil went into my mouth? But, I’ll continue slowly swishing it around and between my teeth.

I’ve read accounts of people who have been too ambitious with the quick swishing and quickly tired and got a sore jaw. From oil pulling!

The coconut oil I am using comes from the Manly Food Co-op. If you haven’t read any of my posts before about the Co-op, allow me to describe it. It’s a small store in Manly that sells organic and local produce and non-perishables in bulk. You know, one of those self-scoop places. Cuts down on packaging and supports healthy and clean eating. You bring your own containers to the Co-op, so many things in my pantry – this coconut oil included – is in a jar that used to be the same product, but has just been refilled and refilled at the Co-op, dramatically reducing the amount of food packaging my household uses.

8.12am : halfway point! The liquid has at least doubled in size in my mouth. This must be why you start with such a small amount! And I notice my tongue is a little tired, I guess from doing the work of ensuring I don’t swallow this stuff! I’m surprised how liquidy it feels – I’ve almost forgotten it was oil, and so different from the solid glob I started with.

Every now and then I’m getting a reminder it’s coconut, I think from a little that’s left on my lips.

8.16am : getting a little bored, looking forward to being done (thankful I’ve had the distraction of writing this blog at the same time).

Actually, a friend of mine who has practiced oil pulling for awhile now does it while she’s in the shower each morning. I’d worry about drowning or accidentally swallowing if I got water in my nose! But she's survived so far.

8.18am : making a concerted effort to swish around my back teeth now – nearly lost some behind the tongue barrier! Stay forward weird oily-bubbly-liquid!

8.20am : distracted myself by loading the dishwasher . .. tongue is getting really tired and I nearly accidentally swallowed this weird, growing, liquidy mixture.

8.21am : 1 minute to go!! Making this final minute a concerted effort to swish, slowly, around all my teeth!

Because I’m curious I spit it in a glass before I rinse with warm water as per the suggestions. The warm water rinse really helps my mouth feel clean.

The stuff in the glass – well, it wasn’t as ‘big’ as I’d thought , but probably doubled in size from the original amount of oil. And as per the other articles I’ve read on the subject, it is white, supposedly from the toxins that have been pulled out of my gums, etc. Upon closer inspection it does have lots of tiny little bubbles, as you’d expect with saliva, and as I felt during the swishing. It didn't turn as viscous and thick as other reports I've read, so I wonder if I did it long enough.

Well, now to flush it down the toilet or toss in the bin (nearly every article says not to put it down the drain, as it will clog the pipes).

The above post was actually written in-situ yesterday morning, and I can report I've just done it again while editing and proofing this ahead of posting. My teeth really did feel silky smooth all day (I followed with my usual brushing, using these amazing Toothy Tabs by Lush (less packaging and recyclable compared to traditional toothpaste, and another unusual natural oral health product).


I am going to try and stick with it for at least a week and see if I can work it into my routine or  not.

Do you practice oil pulling? I'd love any tips or advice as a newbie!
Posted by Lisa Heinze at 07:52 0 comments