It's hard to believe it's been six years since the deadly Rana Plaza collapse in Dhaka, Bangladesh, claimed the lives of 1,138 garment workers, most of them young women.

On the one hand, the perils (and realities) of garment production are incredibly well known. It's not uncommon for people to joke about their clothing "probably being made in a sweatshop", followed by uncomfortable laughter. Whether the Nike scandal of the 1990s springs to mind, images of scruffy children working in the first textile factories of the Industrial Revolution, or the below image of Rana Plaza, somehow we have come to accept that our clothing is made under terrible conditions. 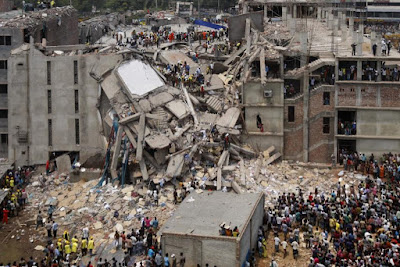 There are so many reasons why this has come to be. The physical and (often) cultural disconnect between the people who make our clothes and ourselves is a primary reason why we can push these images out of our minds when buying new clothing. Not to mention the impact of advertising, fashion promotion, and the mode and speed of consumption which is completely ingrained in our culture and provides further reason to disconnect.

This is Fashion Revolution Week, a time to reflect on who makes our clothes, question brands on their production methods, and learn new ways of using and consuming clothing (which are often old ways!). The Fashion Revolution campaign started on the one-year anniversary of the Rana Plaza collapse, and since then has grown into an international phenomenon (so much so that I am giving a lecture on its impact as part of a "Hashtag Activism" class at Sydney Uni next month). 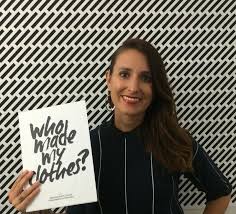 Since the campaign launched in 2014 countless events and activities have occurred that are shaking up the fashion industry. Alongside the #WhoMadeMyClothes social media campaign have been clothes swaps, film screenings, clothing repair workshops, panel discussions, op shop tours and more. And the industry is taking note. There is increasing transparency from fashion brands worldwide, particularly at the final stage of production (this is the location that is noted on your clothing tag as the "Made In" country).

Look, as Fashion Revolution points out, the industry is far from transparent. In their first Transparency Index in 2017 the average level of transparency was 21% (see all the details and methodology on their website). But in 2018 when they measured again, there had been a 5% improvement, which is fantastic.

Similarly, the Ethical Fashion Report by Baptist World Aid has demonstrated some movement in the industry. While there is vast room for improvement, as this article by Peppermint highlights, the pressure put on fashion brands by consumers and the media is having a positive impact.

But this progress will only continue if we continue to agitate. We can't stop asking #WhoMadeMyClothes? We can't stop thinking about our clothing consumption choices, and wondering why we are buying what we buy. We can't become complacent about what materials are used in our clothing, or under what conditions they are created. As I mentioned to my students last week, changing this industry is like turning a giant boat - progress may feel slow, but continued effort is genuinely having an impact, so we have to keep pushing.

So what can you do?

There are tips and tools for all of the above on the Fashion Revolution website.

If you are local in Australia (or New Zealand!) check out all the events happening in our region on the local Facebook Page.

I'll be participating at a panel on the 4th of May called "Rethink your wardrobe" (a bit after Fash Rev week, but let's keep this Revolution going, right?!) at Petersham Town Hall - looks like quite a line up and will be a fabulous swap!

What are you going to do for Fashion Revolution Week?

Instead of bringing you Part Two of Environmental Melancholia today I decided to share a quick story of sustainable fashion progress instead.

I was at the hairdresser last week getting a delicious hair treatment (don't worry, the salon is accredited with Sustainable Salons), and while relaxing in the shampoo chair I overhead another salon patron talking about her current craft project. Sitting on her lap was a a bag bursting with strips of cloth that she was braiding into long ropes. She proceeded to explain to her stylist that she was meeting up with friends later to sew them into baskets.

I was already pleased to hear about her project, as I was reminded of my own (now defunct) secondhand denim rug project. Then my sustainable fashion activist heart leapt when I heard what she said next:

We're trying to make something useful with these old clothes. You know, there is so much clothing waste because of fast fashion.


You can't make this stuff up!

Okay, I know it's not like the entire salon was sitting there upcycling used clothing. But compared to when I started working in this space, to hear a stranger start talking about clothing waste and fast fashion in this way felt revolutionary. And when coupled with the information my students at the University of Sydney already know about the perils of fast fashion, I can feel the tide is turning.

Do we have more work to do?

But I will forever believe in the power of celebrating these wins - we can push for more progress tomorrow.

Where are you overhearing people talk about fashion and sustainability?