When I was a young teenager I dreamed of becoming a marine biologist. My room had posters of whales and ocean sunsets, and a certificate of the dolphin I'd 'adopted'. Growing up amidst the mountains and desert, I was in awe of the ocean and the amount of life it supported, and the mysteries it held.

As so often happens, that dream never came to fruition, but the oceans remain immense sources of wonder and inspiration to me. When I moved to Australia and saw my first dolphins in the wild (near Seal Rocks, NSW), I actually cried. And since living here I've had the privilege of exploring the ocean in all different ways - swimming, snorkeling, diving, surfing, sailing -  I don't think I can ever live apart from it. 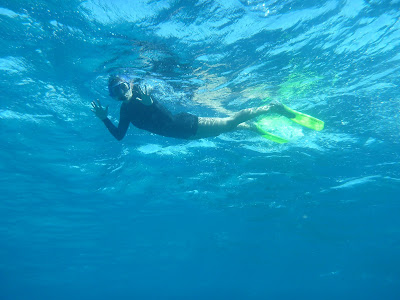 Last week my husband and I took a lovely holiday Queensland, to escape Sydney's 'polar vortex' and enjoy some warmth. We stayed just off Cairns on delightful Fitzroy Island, and took a day trip to the outer Great Barrier Reef. This was not my first trip to the reef (and I doubt it's my last!), but, as with the other visits, I feel my soul completely refreshed following our trip. I feel so lucky to live near this significant site, a Wonder of the Natural World.

The reef is actually the largest living organism on the planet, consisting of 350 different types of hard and soft coral formations, and home to over 1800 species of fish, 125 types of shark, over 4000 species of molluscs and more than 10,000 of sponges types (read more about the reef here). 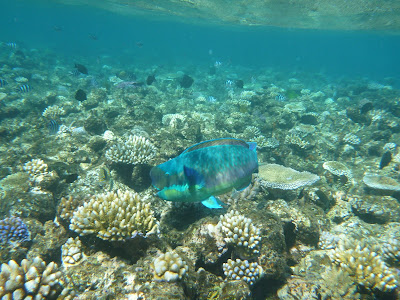 Despite this abundance of life, and its ranking as a UNESCO World Heritage Site, the reef is under threat from a number of sources, including rising temperature and human activity such as dredging, oil spills, over fishing and industrial development, including coal ports.

There was a recent campaign to UNESCO to declare the Great Barrier Reef as 'in danger', but last month it decided against that declaration, instead saying they will continue to monitor it over the next four years. This result was due in part to the Australian government's Reef 2050 plan, a framework to protect the reef over the long term, which was developed in response to some UNESCO recommendations. The plan, some of which has already been implemented, includes a $40 million Reef Trust to go towards innovations in water quality, banning disposal of dredge material into the Great Barrier Reef marine park, and prohibiting future dredging from specified sites. This is a complex plan, and there are multiple views of support and dissent, and is well worth researching more if this is of interest to you. 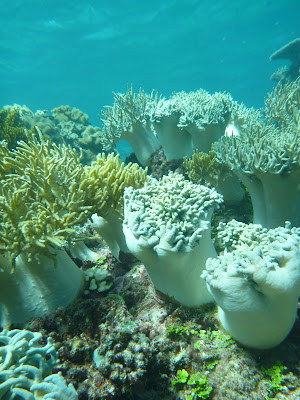 Importantly, and out of the hands of the Reef 2050 plan, is the threat to the Great Barrier Reef due to our changing climate. Coral bleaching occurs when water temperatures rise. The 'bleaching' is the death of the colourful algae in the coral, and the death of the algae has implications for the sea life who feed upon the algae, and therefore the broader ecosystem. Currently bleaching is largely attributed to the El Nino effect, but the predicted 2-3 degree temperature rise due to climate change, will out 97% of the reef in the danger zone of coral bleaching. In addition, ocean acidification is another significant impact as the oceans absorb more carbon dioxide, resulting in chemical changes in the water, which have serious consequences for marine life.


I've just skimmed the issues pertaining to the Reef here, though it is clear that this incredible landmark, and life-giving ecosystem, remains under threat and it's up to us all to continue to protect it. I've committed to be an ambassador for the Reef with WWF, and you can to, by following this link.

So in addition to a beautiful, relaxing holiday, I've had another reminder of the importance of stabilising our climate and putting in stronger regulations about how we treat the natural world around us.

Have you been to the Great Barrier Reef? Do you have anything else to add or other suggested actions we can take? I'd love to hear from you.
xxLisa
Posted by Lisa Heinze at 10:19 0 comments