Since Sydney's Fashion Week is kicking off today, I thought I'd share with you the very exclusive fashion event I attended last Thursday night . . .

The launch of the winter line from Narrabeen Vinnies.

The store had been well-merchandised and well-staffed, and customer service was second-to-none. As I entered the store during it's special late night session I felt the distinctive buzz of excitement and slightly competitive atmosphere as shoppers started their hunt that reminded me of the vibe at the many sample sales I've been to over the years and the Clothing Exchange swap I attended last year.  Real shoppers love a bargain!


After spending about 45 minutes of serious shopping, I left with 5 items to refresh my winter wardrobe. My grand total was less than $50 and I get a special discount if I return before 10 May (maybe my vintage-loving friend Nat will want to join me?).


Now that I've brought home my treasures and the post-shopping euphoria has worn off I have to admit to some slight buyer's remorse. Even though I'm a seasoned shopper, I still let the thrill of the hunt get the better of me, and a few of the items are not up to scratch.

The blouse and jeans are from fast-fashion brands.  I knew this as I tried them on, but I was mostly thinking about how great it was to extend the life of the items instead of critiquing the quality as I should have. Now that I've examined them in more detail, it's obvious these items were made cheaply from poor-quality materials; the blouse is pilling and the chain detailing around the neckline is faulty, and there is zero structure to the jeans - they may as well be leggings. I'm not sure how long I'll hang onto these items before I send them back to Vinnies (not that this is the answer to unwanted fashion, since so much excess clothing is donated annually they can't actually distribute it all).

The Vinnies has a great mix of products - including designer brands and vintage finds - but the abundance of fast fashion items was a stark reminder that we need to wean ourselves off these brands to avoid filling our landfill with unwanted, worn out items. What a great personal reminder of why quality is better than quantity, not only for my style, but also for the environment.

Will I be shopping at Vinnies again?

You betcha! I'm enamoured with my blazer and military jumper. But I'll definitely be a more discerning shopper next time around.

So tell me, what's the best item you've scored from a thrift shop?
Posted by Lisa Heinze at 12:58 2 comments

If you're like me, you were glued to your TV last night for ABC's climate change double header of I Can Change Your Mind About Climate followed by a special Q & A program set up to discuss the documentary that featured Anna Rose, AYCC Co-founder and climate advocate, pitted against Nick Minchin, former Liberal senator and climate challenger. (The Twittersphere was also going off with many outraged greenies venting their frustrations.)

I'll admit there were times I had to focus on deep breathing so my frustration with the climate deniers didn't cause me to turn off the TV altogether.  But despite my dislike for giving sceptics airtime, and the fact that Rose and Minchin, plus the film crew, flew all around the globe to make the documentary, I think it was time well spent in front of the tube.

Not surprisingly, I associated the most with Q&A panelist Rebecca Huntley, social researcher and writer.  Huntley shared a few trends that I have also seen during my time researching and writing about climate change and personal behaviour:

These issues are precisely why I wrote my book (yes, another shameless plug, but this is totally relevant).

I'm a great example of someone who shunned the idea of swapping my lifestyle for a stereotypical hippy one that (for me) meant dreadlocks, eating only homemade soy products and mung beans, and wearing shapeless burlap frocks.  In our culture we place a lot of value in our identities, and we create these identities through the way we look, what clothing we wear, what our homes look like, our pastimes, our cars, our jobs, our friends - the list goes on.  I definitely wasn't prepared to give up my stylish existence for one I didn't identify with, no matter how great the cause.  And if there is anything I'll ever agree with Clive Palmer on, it's that people in developed nations don't want to give up their comfortable lifestyles for the sake of the environment.  The truth is, the majority of Australians/Americans don't identify with the 'hippy' lifestyle associated with environmentalism, and there will be a huge cultural shift required in order to get mainstream America/Australia on the environmental bandwagon, which is what we environmentalists will need if we really want to generate positive change.

After watching the shows I was left with an even deeper conviction that we need more social and cultural research on climate change. The science is in (whether the sceptics choose to accept it or not), and now the challenge will be understanding people better and how we can ease the transition into a less carbon-intensive future.  Our messaging needs to steer away from doom and gloom statistics.  Instead, let's help people understand where they can make the biggest changes in their lives, how they can maintain their unique identities and lifestyles in a sustainable way, and continue celebrating examples of real people making a real difference.

I'd love to hear your opinion on last night's shows, drop me a line or share a comment below!
Posted by Lisa Heinze at 17:16 0 comments

Today's post is slightly less glamorous than my recent posts, but just as important!

By now we've all heard how important it is to switch to compact fluorescent lamps (CFLs). Depending on your source these powerful little globes can use as little as 1/5 the amount of energy and last up to 15 times longer than standard incandescent bulbs, and are an excellent way to save on your energy bills and reduce your carbon footprint. 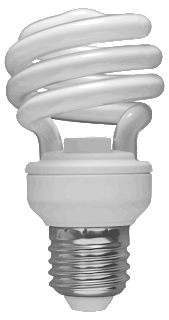 But what do you do when they do eventually burn out?

The bulbs contain a small amount of mercury and should be disposed of carefully so as not to contaminate land or water sources. Since CFLs last so long, this is the first time I've had to deal with this conundrum, and I want to do it right.

I did a little research this morning and thought I'd share with you the highlights:
I'll be utilising the NSW CleanOut program, because luckily my closest drop off location is having a collection this weekend - I'll take the bulb and any other chemicals I need to dispose of at the same time. Since I only use homemade cleaning supplies now there are probably still a few chemical-laden potions hiding underneath my kitchen sink, and I know I have a dozen batteries lying around the place.

Well, the book launch was officially a success!

I wish you all could have been there, but as it was I was lucky enough to be surrounded by best friends, family, colleagues and eco-industry peeps, and I couldn't have asked for anything more.  Well, except perhaps that the rain would have let up even a little bit - it was bucketing down that night!

Here are a few pics from the night. Thanks again to Grandma Takes a Trip for letting me borrow this amazing purple and blue gown - I really did feel like a princess. And Tamburlaine, thanks heaps for the organic wine and bubbly, it was delicious as always. And of course, GBCA, thanks for use of the beautiful GreenHouse and lots of love! 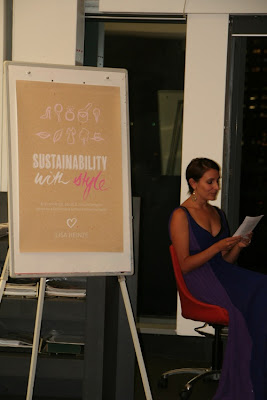 A heartfelt thanks to everyone who has supported me as I wrote, published and launched this book.  As I learned throughout the process, there are a lot of unsustainable things in this world, but lucky for us, love is not one of them. Until next time, xxLisa
Posted by Lisa Heinze at 15:06 0 comments

As you probably know by now, I've written a book.

My official book launch is this week, and I'm putting the finishing touches on party planning as I type.  Of course I need this party to be a reflection of my sustainably stylish lifestyle - here are some of the details:
There are only a few loose ends to tie up now, and this little greenie is buzzing with excitement. Only two sleeps to go!