What did you get up to over the holidays?

I ate a lot, swam a lot, enjoyed not sitting in front of a computer, and caught up on some reading, including Eating the Ocean, by Elspeth Probyn (who happens to be my Associate Supervisor at the University of Sydney).


I absolutely devoured this book (pun very much intended) and learned a lot about how entangled we humans are with fish, the ocean, and the world's fisheries. Eloquently written, Probyn's vivid detail brings us along her journeys following (and eating many) oysters, swimming with tuna, covertly eating endangered bluefin tuna, and tracking the history of herring quines and women's roles in fishing. She encourages us to consider not just the ocean and all its inhabitants, but the people "who spend their lives in and on the sea" in her quest to "figure a different kind of relating of people, oceans and fish."

Probyn takes as a jumping-off point marine science descriptions of our 'simplifed sea' - because we have fished through the food web to the detriment of biodiversity - to challenge assumptions on sustainability because, as she suggests, "what constitutes sustainability is a fraught and complex set of issues."

For instance, have you ever wondered why it seems harder to care about tuna compared to a panda. Is it because, as Probyn suggests, "It's hard, though not impossible, to cuddle a fish"? WWF and Sea Shepherd both thought so when they launched the below campaigns (both discussed in the book). 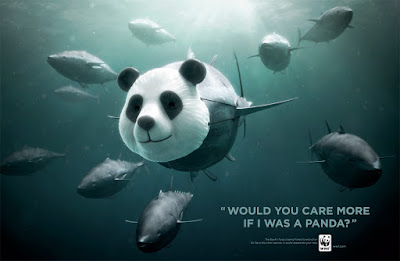 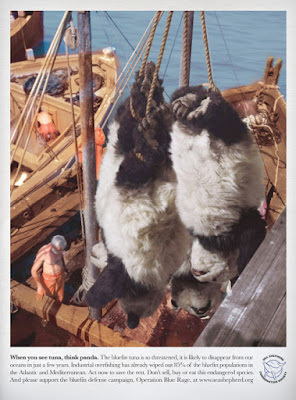 And through her story of Loch Fyne Oysters in Scotland my own assumption that 'employee-owned is better than corporate-owned' was challenged when employees exhibited a visible look of relief at no longer having major financial stress after the company was bought out, and the town continued to have a near-zero unemployment rate thanks to the success of the business.

I was particularly struck by her description of swimming "on the water rather than in the water", most definitely my mode of swimming. I tend to stay halfway in and halfway out, floating on the top, looking down on the sea and its life below. But what might I learn by swimming in the water? How would my perspectives change if I just dove a little deeper and thought with the ocean, rather than about it? If I was lucky, I'd come to similar conclusions as Probyn about the "relatedness of all entities" and reconsider my own consumption habits (seafood or otherwise).

This book is so much more than a dictate on "eat this, don't eat that" that so many sustainability experts offer (including plenty of my own suggestions!), and she successfully avoids moral overtones throughout the book. But when Probyn is asked by people what we should be eating, she does have an answer, it "is always little fish - those that reproduce quickly, don't live too long, and humble and abase our gargantuan appetites for the disappearing top predators of the ocean". There are human health benefits as well as oceanic biodiversity benefits of this suggestion - you may even reconsider popping another Omega-3 tablet and reaching for a tin of sardines instead. If you're like me, you'll feel compelled to heed Probyn's advice to "eat the ocean better" and "to eat with the ocean".

I've greatly oversimplified the content of this book, offering a teaser to encourage you to read it yourself. I learned so much about the state of our oceans, where our seafood comes from, the danger in always choosing tuna and salmon, and the role of aquaculture (which provides more than half of all seafood consumed by humans!), but most importantly, I was encouraged to think differently about what 'sustainability' means, which I think is so important as a person who works in this sphere.

Now - off to make some lunch. I think I'll have a salad with some anchovies.
Posted by Lisa Heinze at 13:24 0 comments

This week I was delighted to don my favourite pink party dress and be interviewed by my colleague at the University of Sydney, the smart and charming Tara Moss, for her Victory Lamour blog. Below is a brief excerpt and a link to her website. 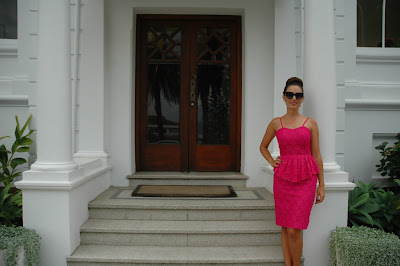 ‘One of the most important things we can all do is to love our clothes and take good care of them…mending something when it’s been damaged.’ – Lisa Heinze

For the first blog of 2017 I thought I would visit one of my passions, and resolutions – to be kinder to the environment. I’m no eco angel, but I have been drawn to vintage for aesthetic and historical as well as ethical reasons. Every time I buy, trade, sell and repair or mend vintage, whether it is a 1950s dress or a 1960s caravan, I feel like I am investing not only in something built to last, as most things were in that time, but in something that has a lighter footprint on the planet because new materials have not been needed to produce it.

This matters with clothing, perhaps more than most of us realise.

In the mid century, particularly during WW2 when ‘make do and mend‘ was a national priority and strict rations impacted every day people, recycling, re-using and mending was down to an art form. There were multiple handbooks on the subject, and members of each household took time to mend and fix the family’s things, whether it was the radio or a pair of trousers. Today there are many millions – billions even – of kilos of discarded clothing on the planet. In fact, journalist Lucy Seigle points out that 80 billion new garments are produced globally every year. (You can check out my interview with Lucy here.)

Continue reading on the Victory Lamour website.
Posted by Lisa Heinze at 10:24 0 comments