You know that awesome feeling you get when you go through your wardrobe, clear out the things you don't wear anymore, and take a big bag of clothes to the local charity shop?

Well, I'm about to make it not such a nice feeling anymore.

Only 1/3 to 1/5 of all clothing gets resold in the country where it was donated because we are donating way too many clothes. And all the excess must be dealt with at the cost of the charity stores themselves. Some of the excess gets turned into rags, insulation or sofa-stuffing (excellent recycling!), some of it gets thrown out altogether because it's in such poor condition, while the rest gets bundled up and sent to developing countries. 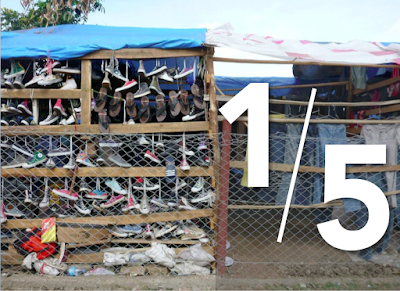 Many countries have a bustling trade in secondhand Western clothing. The photo I've included here was taken on my travels through Tanzania in 2012, where the secondhand market I visited was about the size of a football field and filled with used western clothing at super cheap prices.

Aside from the fact that many of the goods were meant to be donated but were confiscated somewhere along the line to be sold (though some charity shops sell bundles to secondhand sellers and it can be nearly impossible to make the distinction), the local textile and apparel industries have been devastated as they simply cannot compete on price with these goods.

This is also devastating from a cultural perspective, because for all the good that comes with free trade and globalisation, we also see a watering down of local cultures as we move toward a unified international 'look'. I remember feeling so surprised while in Africa to see so many people wearing clothes I'd see in Australia or America. I don't mean this in an 'exoticisation of others' kind of way, but more from the perspective that I value diversity and difference, and wished to learn more about a different culture. (And from a purely aesthetic perspective - I don't really want a world where everyone wears jeans and t-shirts all the time!)

Things may change in the future, however. As Huffington Post reports:

In March, the East African Community (EAC), which is made up of Kenya, Uganda, Tanzania, Burundi and Rwanda, proposed banning all imported used clothing and shoes by 2019. The goal is to stop relying on imports from rich nations, boost local manufacturing and create new jobs.

The proposal is facing intense scrutiny and may not pass (in large part to American interests in keeping the secondhand market booming). But it's certainly enough to make me reconsider my annual wardrobe clean out with fresh eyes.

If you have clothes sitting in your wardrobe that you're needing to clear out, why not participate in a clothes swap instead? You can organise one with your friends, colleagues or other social groups, or find one supported by a local council or organisation.

In fact, I'll be presenting at a clothes swap next week for Willoughby Council - if you're in the area, I'd love to see you there!

Of course I'd not advocating you never donate your used clothes to charity. Quality secondhand clothing makes a real difference to these shops and to people who are in genuine need of decent clothing. But before you donate your clothes make sure they pass the following test:


If so, donate with a good conscience.

And remember, we can all improve on this issue by reducing the number of new items we buy each year, too. If you're not buying large amounts of clothing, you won't have large amounts to clear out. It's a win-win-win.
Posted by Lisa Heinze at 11:09