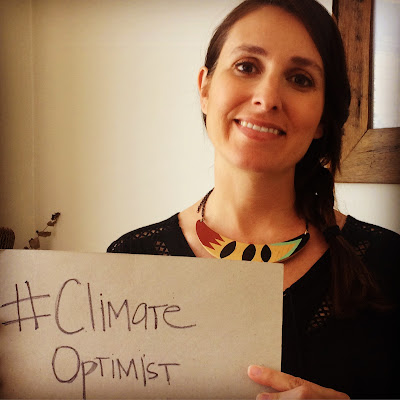 Now, I didn't need any urging to be optimistic about climate change. Despite all the bad news that surrounds climate change, including the impacts already happening like increased extreme weather events around the world and climate refugees, I've been an optimist ever since I became an environmentalist.

Actually, I think that it's because I'm an active environmentalist that I am an optimist. I feel incredibly privileged to have met countless innovators and changemakers through my work, including through the green building industry, the sustainable fashion movement, and the many climate and renewable activists I've met along the way.  I know people who have launched social enterprises that recycle used fishing nets into skateboards and sunglasses, created transparent and ethical supply chains for textiles, made apps to help people shop more ethically, invented sustainability roles for themselves, and worked with big business and government to address larger systems and institutions. Simply put, there is so much activity, and so many people working on solving the climate (and other environmental) crisis, that there is no reason not to be an optimist.

I know not everyone can meet these people in their day jobs and hear about the latest innovations as they are being created and tested, so I thought I'd share some of the reasons why I feel so optimistic:


In short - passion and innovation change the world, and I see no shortage of either.


I wouldn't be true to my activist self if I didn't add a final caveat: just because I am optimistic does not mean we can be complacent. We have a lot of work to do, and we need all hands on deck - citizens, businesses and governments. So while I am optimistic - and I hope you feel optimistic, too - I don't want to give the impression our work here is done.

What do you think? Are you a climate optimist? Why? Why not? I'd love to hear from you, so let's keep this important discussion moving.

xxLisa
Posted by Lisa Heinze at 08:39

Email ThisBlogThis!Share to TwitterShare to FacebookShare to Pinterest
Labels: climate