I recently applied for a climate job that required written tasks as the second stage of recruitment. While ultimately I was unsuccessful in getting the role, I really enjoyed the writing tasks. Sort of like an awesome homework assignment (what can I say, I'm a school nerd through a through). So I thought I may as well share some of the writing here, perhaps you'll be as inspired as I was learning about the climate forward Swinomish Indian Tribal Community, and dive into the uplifting rabbit hole of Indigenous and First Nations environmental stewardship.

Known as the People of the Salmon, the Swinomish Tribal Community’s way of life has been supported by the waters of northwestern Washington for 10,000 years. The Swinomish tribe consider themselves stewards of the land and water surrounding Fidalgo Island, where they have resided since the reservation was established in 1855. Currently the tribe is reviving an ancient mariculture practice of establishing a clam garden on reservation tidelands in an effort to support the health, wellbeing and culture of its people as part of the Swinomish Climate Adaptation Plan. As outlined by the tribe, this project “will encourage the integration of traditional ecological knowledge in contemporary resource management and climate change adaptation strategies as well as bolster local food security, support tribal treaty rights, and provide ecological and cultural benefits to the community.”

The Swinomish tribe is familiar with climate innovation; they established the first climate change initiative by a Native American Tribe back in 2007. The community has since experienced increased effects of climate change in the form of greater floods, storm surges and erosion on their land. The tribe has also noted warming waters, ocean acidification, and human land-use actions that have led to habitat loss and degradation of the shellfish, salmon and other finfish that sustain their community. Aside from negative health outcomes of losing traditional foods such as salmon and shellfish, the tribe would experience profound cultural loss should healthy seafood populations not be maintained due to the inherent connection between people, water and spirituality among the tribe.

As part of their climate adaptation plan, the Swinomish tribe regularly partners with other tribes, scientists and state agencies (such as the Skagit River System Cooperative). Adaptation projects include improving spawning beds in the Skagit River, working with marine ecologists to restore healthy oyster populations, wetland restoration projects to preserve native plants and help manage flooding, as well as fighting a potential mine upstream.

While indigenous communities are disproportionally impacted by climate change, the example of the Swinomish tribe demonstrates unique abilities to adapt to our changing climate due to their connection to land, understanding of biodiversity, and experiences of endurance. 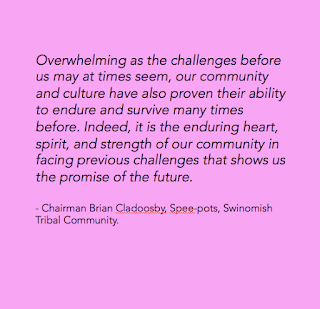 Email ThisBlogThis!Share to TwitterShare to FacebookShare to Pinterest
Labels: climate